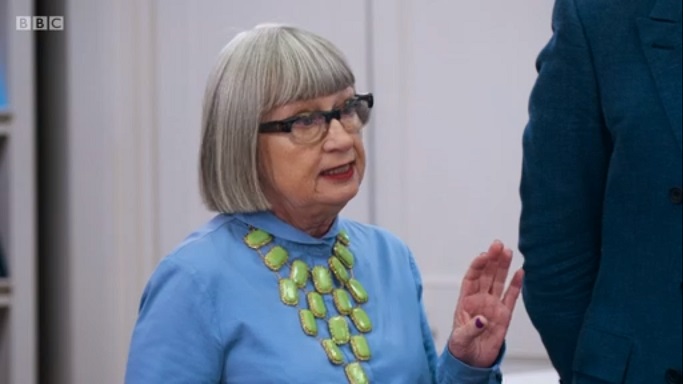 This week the pattern challenge is Palazzo pants, those wafty trousers that always seem like a good idea but will without fail make you look like you’re about to have a clown on a unicycle emerge from between your ankles. The main aspects for the challenge are to incorporate an invisible zip (all zips should be invisible (show me one garment that is bettered by having an exposed zip), well concealed pockets and to pattern match as best you can, which means everyone makes a mad dash for the fabric wall to choose the ugliest fabrics they could get their hands on and the winner is obviously Fiona with her early 2000s Windows XP screensaver: 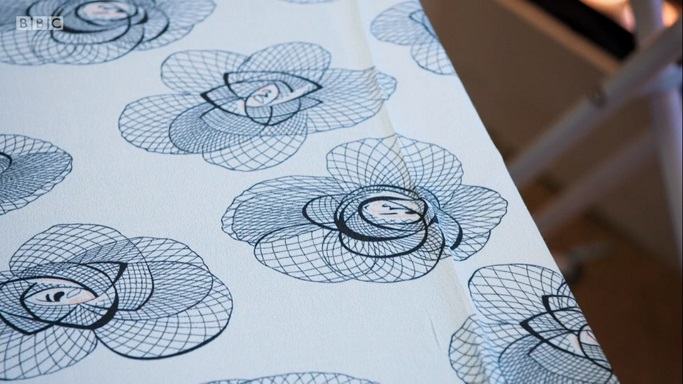 Matt and Alex on the other hand opt for extremely busy leopard and floral prints so they don’t have to worry about pattern matching which feels to me like they misunderstood the assignment, Liz was in a similar boat with her zoological print and still took the time to make sure her tigers had both a head and ass and yet she somehow only landed in sixth BETWEEN ALEX AND MATT. The leopard print actually got a fair outing this round in what can only be described as The Exposed Pocket Affair as Peter and Nicole decide to highlight their hidden pockets by making the bags out of leopard print while Hazel opted for a lurid yellow against her Africa Wax Print and it did not go down well. To be fair with Peter we expect some garish and bad decision BECAUSE HE SEEMS TO HAVE A HISTORY OF IT: 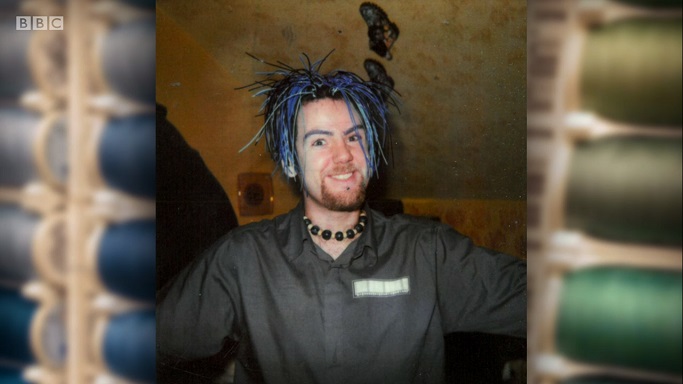 That is what happens when you watch the Matrix too many times.

There’s a lot of talk from the male sewers (that’s So-Errs) about wanting to wear more palazzo pants (guys, you can. It’s fine.) and Patrick says he has several pairs but insists on calling them Karate or Judo Pants because you know, fragile masculinity, I COULD TOTALLY BEAT YOU UP IN MY WAFTY HOLIDAY PANTS, HOLD MY DACQUIRI! But it seems that Mark is no stranger to some jazzy trews:

And if you think he looks like he takes all of his fashion advice from watching Doctor Who, well it’s not *untrue* 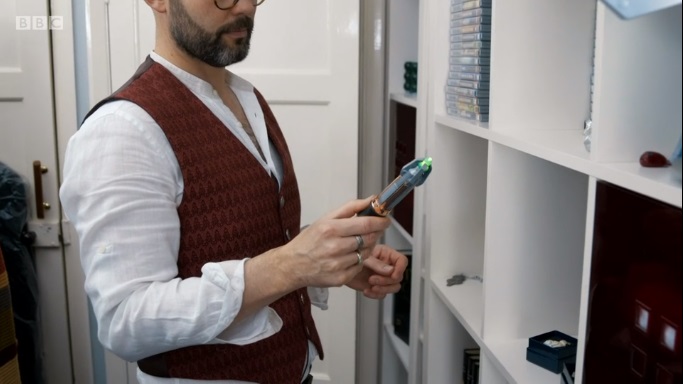 When I tell you my mother, who doesn’t watch Doctor Who, screamed when she saw him holding that sonic screwdriver I am not lying.

Some people have to be more careful with their pattern matching than others, unless Ali wants to put a giant blood red chrysanthemum right over the crotch of her pants, and while we’re on the subject of Ali I just want to talk about her gloriously garish golfing clothes and how much improved any golfing tournament would be if everyone dressed like this: 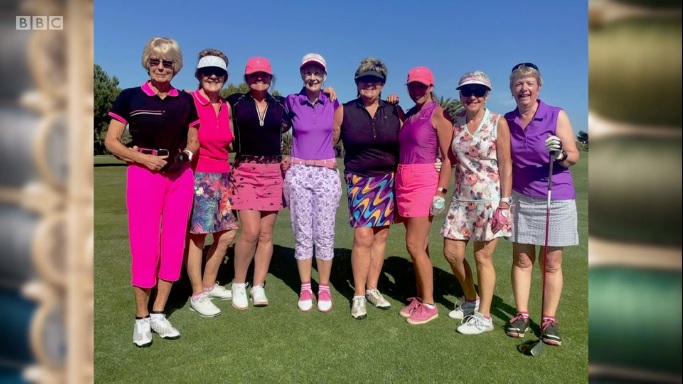 Tiger Woods who?
Less successful in her pattern matching is Hazel with her Africa Wax Print who just goes Full Vagina on the crotch and then Fiona who just loses all hope and forgoes it entirely because she chose a crepe fabric, DID ALEX’S HAM DRESS FROM LAST WEEK TEACH YOU NOTHING? NO CREPE! Although she does perfectly match the pocket bags, the one part of the garment that you cannot see, but more than that she didn’t even manage to get the waistband on properly.

As far as hidden zips went, I think everyone pretty much succeeded, except Alex who puckered his and subsequently gave his pants an exposed bottom, hey I’m sure there’s a market out there for that.

In the end this ranking is thus:

The transformation challenge this week is to turn two towels into a beach outfit for a woman and if this sounds hideous it’s because it is: 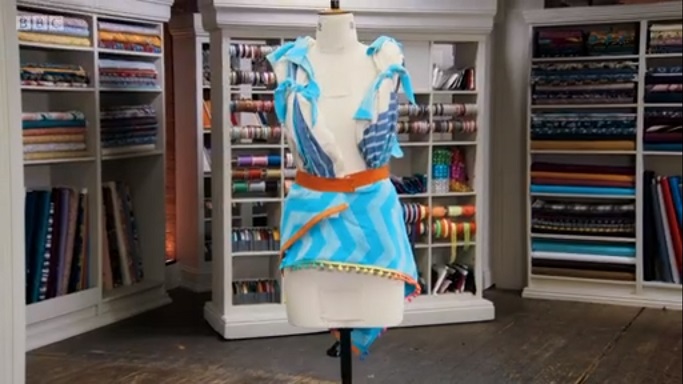 Nobody wants any of this! Albeit, they do get some flimsy scarf-like towels but most of them just immediately grab the thick fleecy beach towels, or the dish cloths if you’re Ali 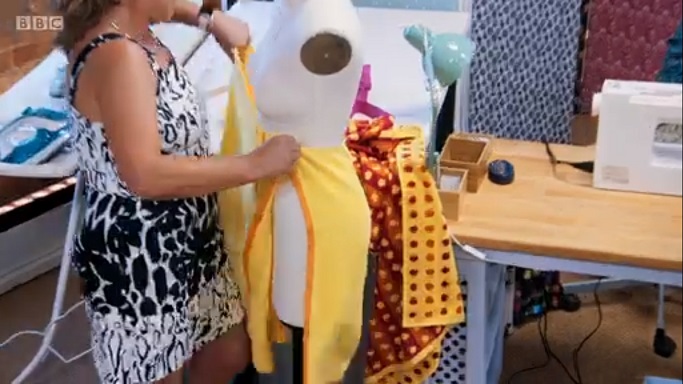 and just thinking about putting a fleecy jacket over your sodden swimming costume makes my skin crawl.

Unsurprisingly not a lot of them have any experience sewing beach towels, everyone except Grand Mother Therese who lived in Abu Dhabi 40 years ago, where apparently towelling is common practice (can I see the receipts?) and Liz who was once “a crusty mama” which means she made cloth nappies one time???? And then there’s Matt who made a full on Poirot cosplay dressing gown for his father: 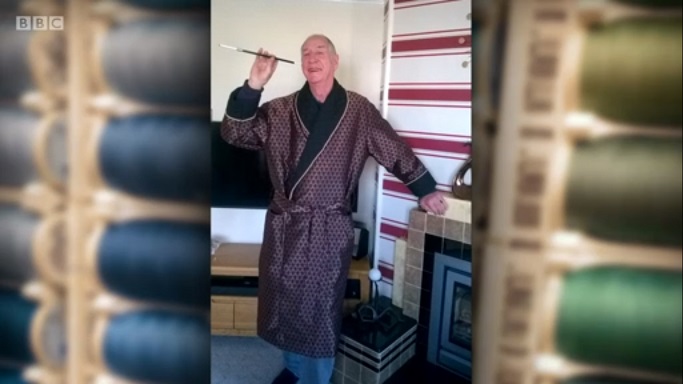 And decides to follow up on this feat of tailoring by…. making a truly hideous skirt: 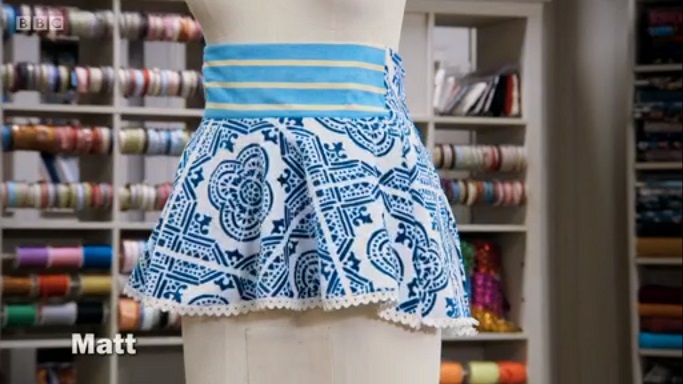 Which is so bad it lands him at the bottom of the pile, even below Alex whose outfit was literally just a towel draped over the shoulders of a mannequin:

There was meant to be an accompanying skirt but he lost all sense of ambition and decided to just leave it at that, which I find completely relatable. On the other end of the spectrum is Peter who wants to attach “a long, tall hood” to his garment and I’m not sure the KKK have a desire for beach wear? His hooded beach poncho does look very chic once he’s finished it though and the judges are particularly enamoured with it, less successful in their eyes is Fiona who wanted to make something for the Ibiza club going crowd – as though any 20-something with an Instagram account is going to wear a dress made out of towels, no matter how much it shows their tits.

You would think Clare would be pretty at home in this challenge, having previously made a cashmere cardigan into a pair of pants, which still mystifies me, but alas she stays boring and makes what I can only describe as Paddington Bear’s life jacket: 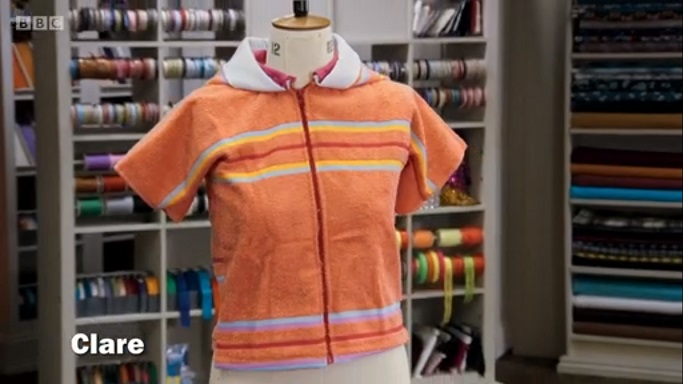 She’s not the only one going for utility as Mark has decided to make a similar coat – but his has pockets for your crab! Sadly the judges were after more of a beach-to-bar transition which showed in the final ranking of the garments where the more skin you could bare the higher you placed:

Going in to the final round the people who really had some work to do were Sweet Baby Angel Alex and Fiona and Esme and Patrick have to desperately pretend as though they haven’t already packed up Alex’s sewing machine.

The final challenge of holiday week is to make a hideous novelty shirt that the LADS ON TOUR wear for only one summer. This of course means the models for the week are men, and you would think the sewers (that’s So-Errs) had been locked in solitary confinement for a month because Ali is flirting like an eccentric aunt at a wedding! I mean it’s fair because: 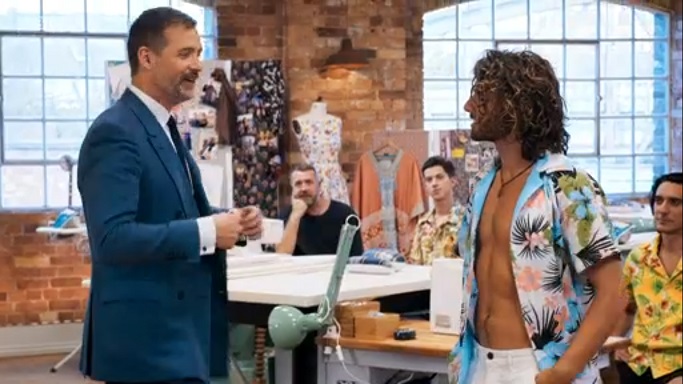 Also props to her for making her model walk down with the shirt unbuttoned by choice, unlike Fiona who later sends her model down the “runway” with an unbuttoned shirt, less out of choice and more because she ran out of time because she tried to be too much of a suck up and do two pockets (BECAUSE GOD FORBID MEN DON’T HAVE A FINCTIONING POCEKET) and then violently hissed “MORE SWAGGER!” at her model as though that would hide the fact her pockets were held on by pins. But we’re getting ahead of ourselves now.

There are two kinds of patterns when it comes to men’s holiday shirts: oversized jungle print (it’s never floral because that would put their masculinity in question or something) or jazzy animals. Which was the first clue that Alex was going astray because he chose a neon floral four way stretch. WHO WEARS A STRETCH FABRIC BUTTON UP SHIRT ON HOLIDAY? I MEAN, He was fully just making a dance costume that he was hoping would be good enough for him to wear afterwards, and I fully support that, but maybe make sure you know how to use that fabric next time.

Going for jazzy animals are Clare and that llama print that Dunelm is practically trying to give away at this point, Therese with some parrots and then Liz and some koi carp that then gets turned into a LIZ REALLY LOVES JAPAN story line because she happens to be wearing a cute sushi shirt and has some Japanese tattoos which I really hope are mistranslations, there’s nothing more I love than a white person realising their kanji tattoo says “pig’s foot”. Liz is going for a loose fitting 90s style shirt, which basically means she doesn’t have to worry about fitting it too much because she wants her model to look like Rocko from Rocko’s Modern Life, which she absolutely accomplishes so props to her

Also going for an element of oversizing is Peter and some almost hilarious sleeves that Patrick has to very politely try not to laugh at.

Our IT’S-JUNGLE-NOT-FLORAL shirts are being made by Ali, Peter and Nicole, the latter of which is making a traditional Trinidadian shirt-jac inspired by her late father and it’s clearly a very emotional process for her because halfway through she gets a little overwhelmed and Joe Lycett does a fantastic job of distracting her from her concerns and reassuring her and she gets on with it and knocks it out of the park and was absolutely robbed for garment of the week. I do hope they paused the clock for 10 minutes while she fixed her horrendously smudged mascara. Also robbed for garment of the week was Hazel who I think out of everyone made the most stylish shirt: 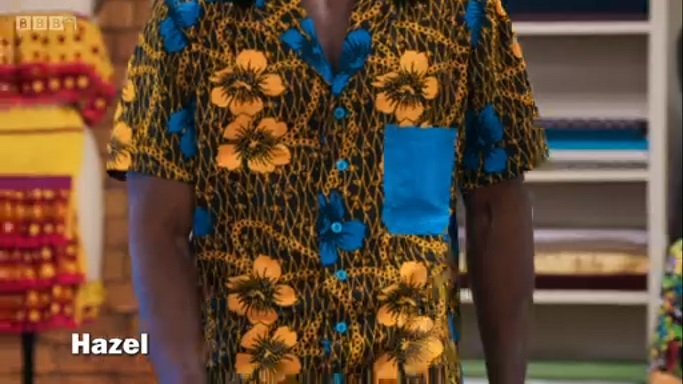 The pocket may have been a touch big but it was still better than Mark who while managing to make his pockets completely invisible completely failed to patter match the front of his shirt which seemed like a major component of the challenge? But it may have also been out of intimidation because Mark’s model did look like he was about to break your knee caps, but at a Tiki Bar. 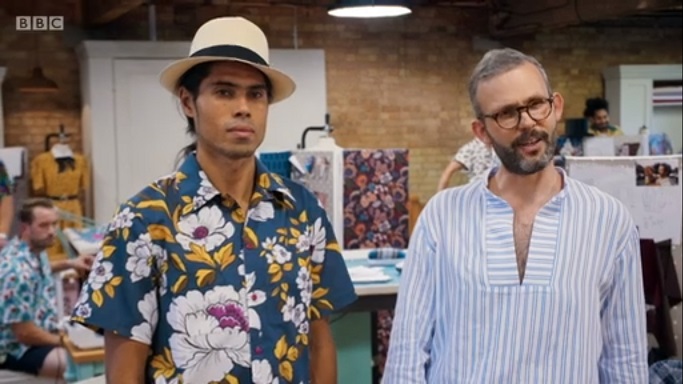 With Mark inexplicably winning the garment of the week the judges were left with a toss up between Fiona who might have been able to make something had she not fannied about making 2 pockets for most of the challenge and Alex whose concept of fabrics is perhaps non-existent and really it’s that that does him in which is a shocker to me because I was so convinced he was responsible for the Marge Simpson At Carnivale shocker of an outfit: 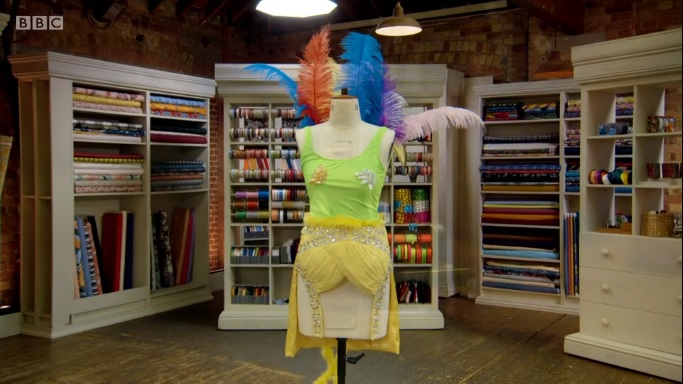 Children Week, in which Alex will return as a model and Therese will mention she is a grandmother no less than 15 times.