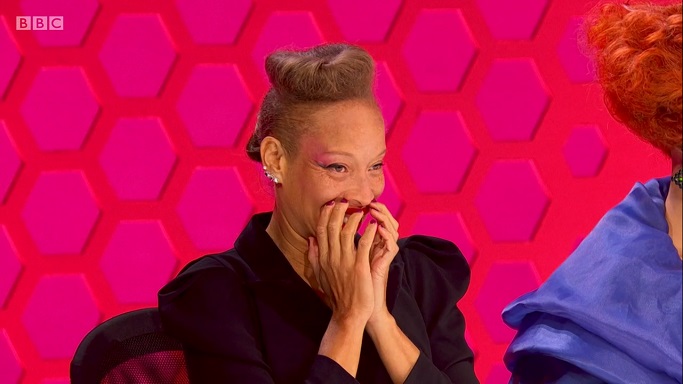 Stacey McKenzie LIVING her best life during that lipsync is all the positive energy we need to get us through lockdown.

This Snatch Game was a tricky one: teetering precariously on descending into the cringe-chaos of Season 4’s SNOOKIE WANT SMOOSH SMOOSH, the all round flatlines of Season 11 and the comedy high of Jinkx Monsoon. I will say, i think everyone chose relatively well, or at least characters that could have been good – nobody was trying to make Gaga or Beyonce happen for the umpteenth time – although we may have to add Mariah Carey to The List of Impossible Snatch Games. 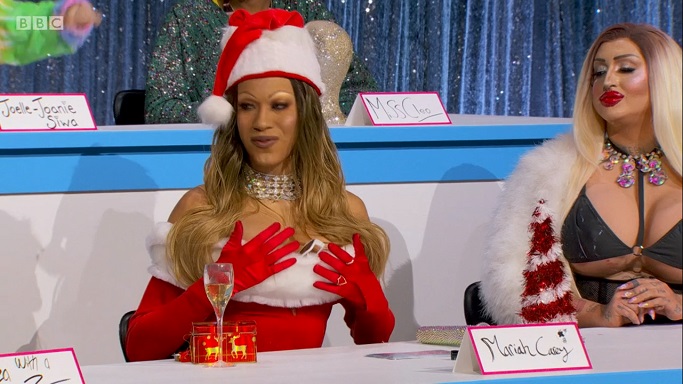 Maybe it’s because I’m more familiar with Mariah Carey that this felt like more of a bomb than Priyanka’s Miss Cleo – she just failed to embody that above-it-all persona that IS Mariah. And granted Snatch Game has, in the past, proven to be more of a mindfuck for ESL Queens. Far from a memorable disaster, this Mimi will sadly fade into obscurity. 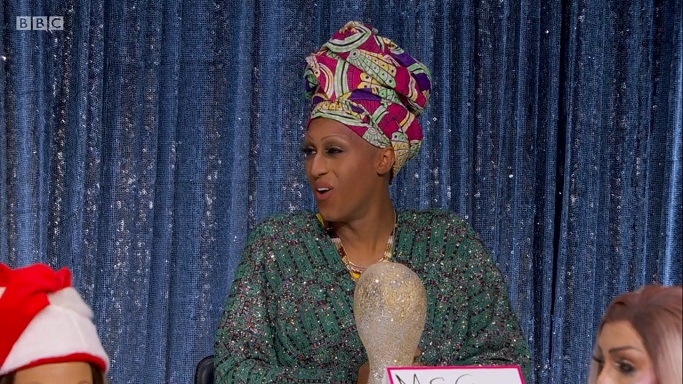 How can you do a TV psychic character THIS BADLY when you literally have several examples of Queens doing it extremely well to pull from. You literally just have to write the answer down after the contestant reveals their answer – IT’S NOT ROCKET SCIENCE PRIYANKA. 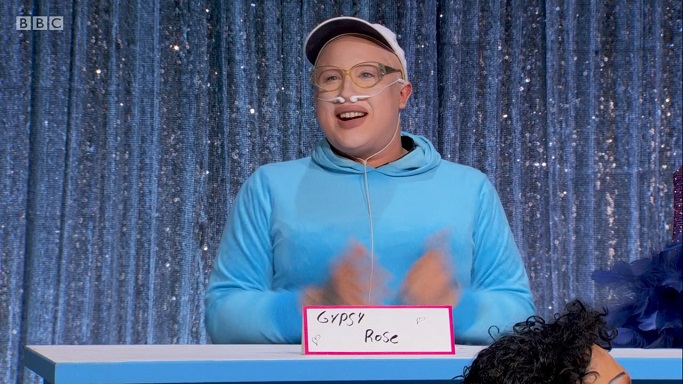 You can barely count the amount of Queens that have tried to make Gypsy Rose Blanchard funny on all 20 of your digits – it’s a real thing that they’re trying to make happen and, as far as I’ve seen, none of them have and I’m not sure anyone can make her funny, I think she’s just innately a sad, kind of depressing, person. And to think she ruined a pair of earphones for this – which is also largely why I believe she was saved. 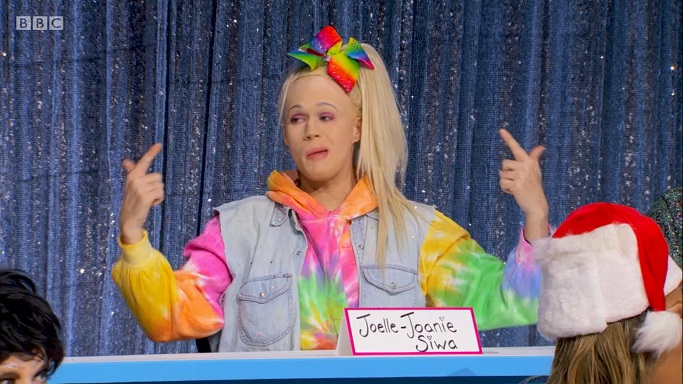 This busted looking bootleg JoJo Siwa doll <3. I thought she could have pushed it a lot further and her attempt to sort of become more adult with her answers as the game went along didn’t really work – or her execution of it was Not Great™. But I could listen to her saying “Haiw” all day. 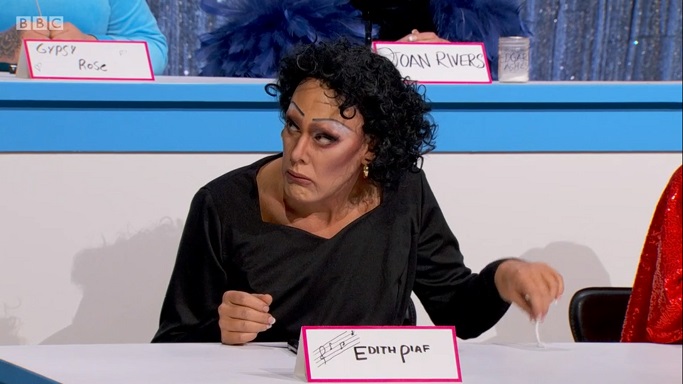 I was not as enamoured by this as the judges were, I found it kind of a laborious chore to get through her jokes – but what I did love was that, ironically, we finally got to see the real Rita Baga – the over it seasoned queen is is DONE with the complaining of those newer to the scene. But stubbing out that cigarette was probably the only funny thing she actually did.

I think it’s fair to say this is a very easy option – show me one person who cannot do an on point Cock Destroyers™ impression, and Ilona was no exception. I loved the buildup of her performance as her lipstick became more and more smudged, having this sort of a narrative detail is something a lot of Queens forget in Snatch Game and Ilona played it perfectly. Also spelling “cock” as “C… OCK” definitely goes down in the book of the best Snatch Game quotes. 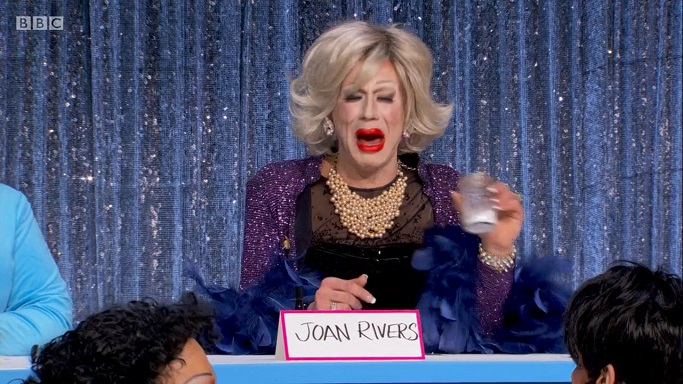 Thank God we finally got a Joan Rivers, and it was done by someone competent – remember how we had clamoured for years for someone to do Whoopi Goldberg and then Yvie Oddly shat out whatever awful Whoopi impression she was doing? Bad times. I liked most of Jimbo’s performance, she was great at interacting, I don’t necessarily think Edgar’s Ashes were the best gimmick, but at least it was better than Kiara’s glass of champagne. 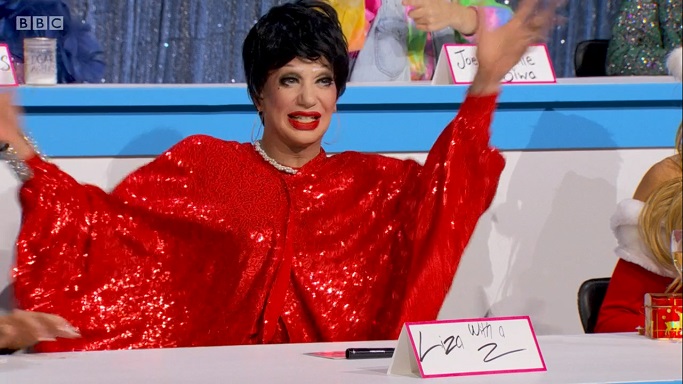 I loved this performance – you can’t really go wrong with Liza, and everyone can do a Liza impersonation. But I think were Scarlett really shone was in her interactions with the other Queens, I think she was just that little bit better at it than Jimbo, and just the absurdity of Liza Minelli developing a grudge with JoJo Siwa was not something I knew I needed in my life.

This is always my least favourite type of runway because the judges can never decide if they want the Queens to recreate the outfit to the letter, or take a Celine outfit and make it DRAG while still embodying the celeb you are showcasing – I’m personally more inclined to the latter because it allows for more creative freedom and I’m not going to get hung over the earrings being circular when they should have been teardrop OH MY GOD BRITA, HOW DARE YOU. 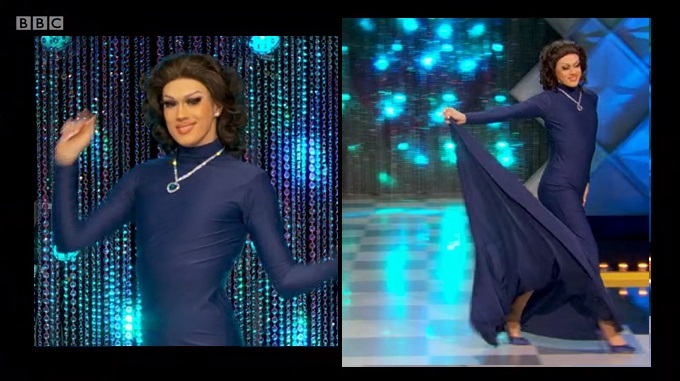 The dress is doing her no favours, it’s barely fitting over her corset, which is barely cinching her and to me it’s reading more Young Queen Elizabeth than it is Celine Dion. This could have done with going the same route as Jimbo and bedazzling the hell out of it – or just choosing a fabric that doesn’t look this flimsy. 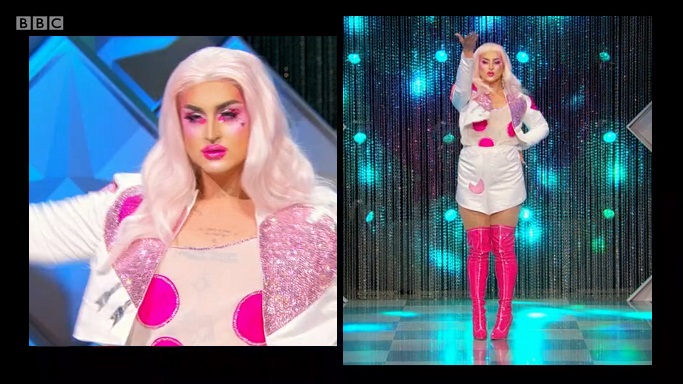 That makeup is STUNNING – potentially my favourite of the season so far, but it’s not reading even tangentially Celine. Even though Celine wore this outfit, it’s not really what you go to when you think of Celine and I think that really should at least somewhat go into your choice, it’s like when Milk did her Celine number and wore that awful MET Gala look (not the Camp one). Oh and their close up of her crotch as she walked the runway was RUDE and she deserves better than that. 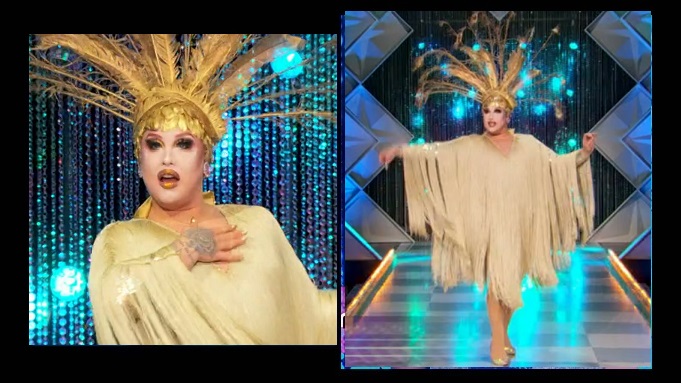 Well someone was going to do the MET Gala look and I just wish it had been done better – it lacks serious sparkle and pizzazz. 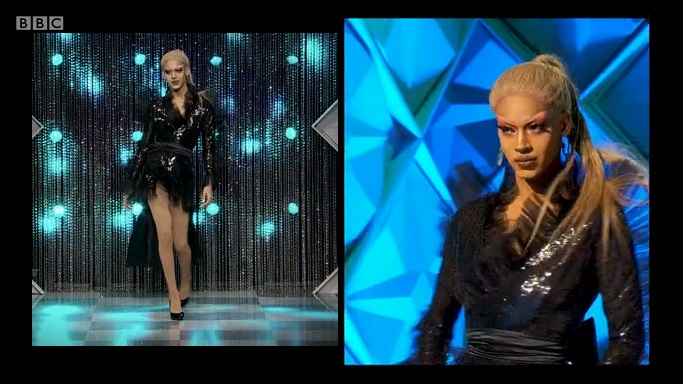 it’s an almost exact replica and she looks beautiful but ooof that thinning pony tail that she was whipping around like it was 24 inches of full human hair. It’s just really unfortunate that it’s yet another short dress that verges on nightwear. 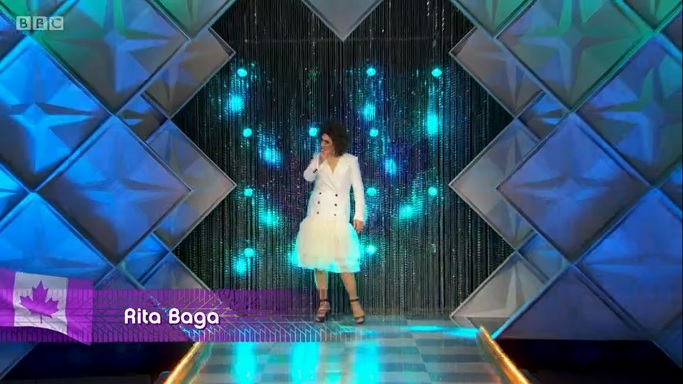 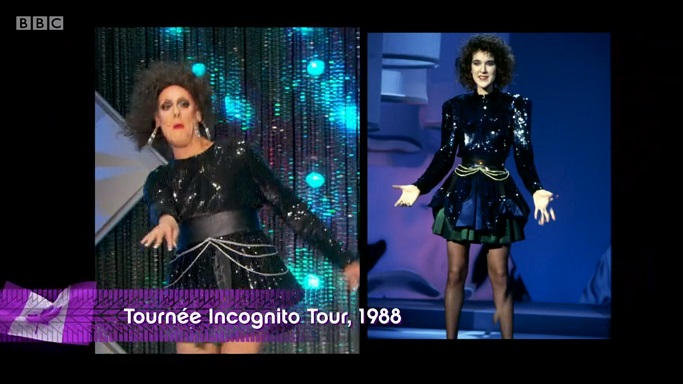 Praise be to her for giving us Eurovision Celine. I was a little distracted by the bagginess of the nude illusion that she was using to cover the neckline of her reveal but it’s a small price to pay. 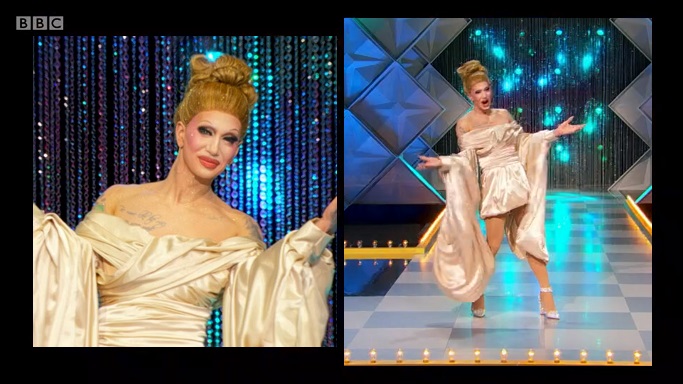 Maybe it’s because I have always loved this particular Celine outfit – give me some fuck-off-massive sleeves on anything and I’m yours. I thought she looked extremely elegant and it was a change of pace to her usual high energy, pop-punk aesethetic, runway delivery that I appreciated. 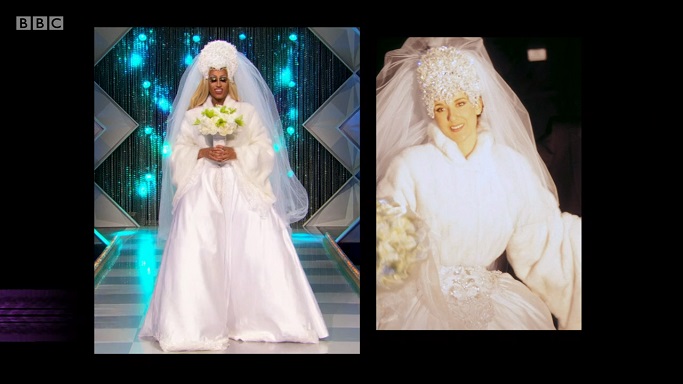 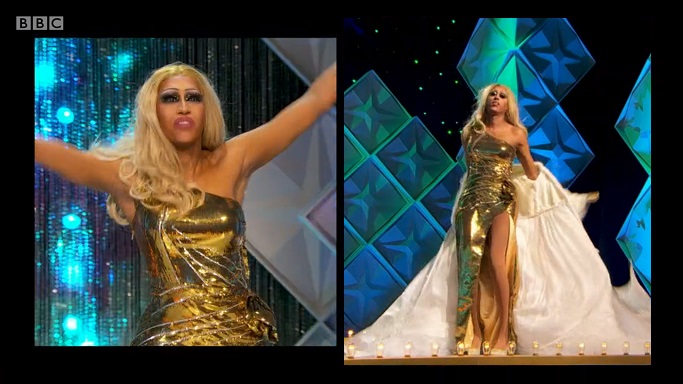 This obviously has the benefit of being one of the most dramatically beautiful outfits Celine has ever worn and I desperately want to know what the reaction was in the room when Priyanka took THIS out of her case because I can imagine there were some shook Queens. I liked the reveal, I think she should have saved it for the lipsync because no matter how major her outfit was, Priyanka was always going to be lipsyncing. 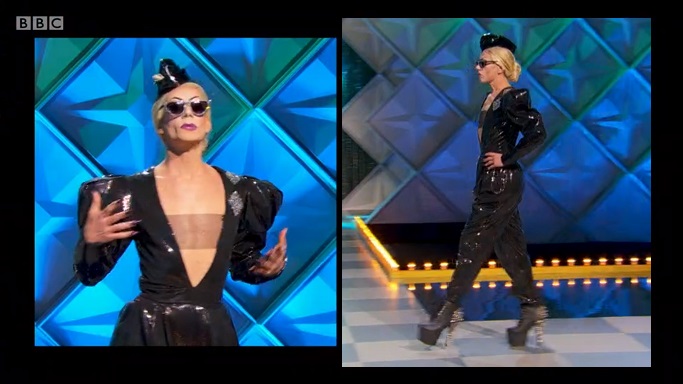 This is the take on this challenge that I love most – it’s the outfit but turned up to 11. It’s not even necessarily an outfit I immediately think of as being Celine and yet Jimbo manages to make it more Celine than even Celine did. 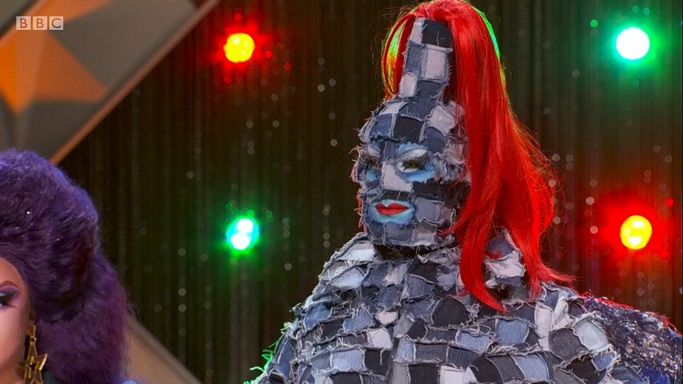