It was a week by numbers with Mercedes just circling the drain, Scarlet living her drunk aunt fantasy and Brooke and Vanjie continue their tepid romance. But at least the Rusical was funny? Maybe? I laughed at least 4 times which is 4 times more than I did at any since Season 6. YEEEEEAH!

The queens come back into the Werk Room following the Six Way Lipsync From Hell and Honey Davenport is mourned in that we are treated to this shot:

Even Soju got more of a send off and she was here for an afternoon. The rest of it is just Shuga Cain going through it because she was convinced she was going home ad she has now realised how hard she has to bring it every week – which is my least favourite Drag Race trope of all time, and then it’s a quick de-drag and Scarlet looks alarmingly like Riff Raff from The Rocky Horror Picture Show

Oh and if you thought production was letting the Ariel vs Silky feud die you are very much mistaken because it cuts dead from Silky saying “Ho you must go” to Ariel.

This week’s mini challenge was to deliver an extremely unfunny fake news report about RuPaul supposedly money laundering (I really don’t know what it was about because the editing was so weirdly cobbled together) in the style of Rachel Maddow. It didn’t help that so many of queens didn’t seem to possess even the most basic of reading skills, Vanjie just gave up even trying to read and mumbled “the fuck?” and aggressively hit the keyboard a bit meanwhile Silky tried her best to get to grips with the word “colonel” and just about physically wrestled with it. Really the only thing worth talking about though is the fact an alarming amount of the queens just looked like Alan Carr:

Scarlet wins mainly just for being able to pass a basic phonics test and she gets the dubious honour of casting the roles for Trump: The Rusical – a political revamp of Grease starring the important women in Trump’s life.

Silky shocks everyone by telling us she is a registered republican but before Reddit can cancel her she says it is a tactical misrepresentation in order to subvert the gentrification of liberal areas at the hand of Republican big money.

Well now that she’s been eliminated maybe Mercedes and Miss Fame can run a farm together?

The Choreography Calamity with Yanis Marshall

So everyone got their wish and Todrick Hall was not the choreographer for the challenge, instead he was replaced with Yanis Marshall seemingly in an attempt to make everyone want Todrick to come back – because he was being a dick, and I loved it. Poor Ra’Jah did not. But then again I think by this point you should know that the answer to “Do you have any prior dancing experience?” is ALWAYS “no” unless you can actually back it up with receipts – see Brooke Lynn. Ra’Jah very proudly says “yes” and then lists every style she has ever maybe done once. In her bedroom. 15 years ago. WHEN SHE WAS EIGHTEEN. And then when asked to showcase this dancing prowess she does so looking like the bakers in The Great British Bake Off trying to fold pretzels for the first time. In a similar predicament is Scarlet whose dancing can only be called Wine Mom

But it’s still quite charming. Ariel is also going through it, having expected a fun time and not “The Beyonce half time show” and I have never identified more with a queen than her in this moment:

The imposter syndrome is real. Brooke obviously excels and Yvie does pretty great despite a tentativeness around her joints which are prone to dislocating upon impact – I know why they didn’t cast her on season 9 now. 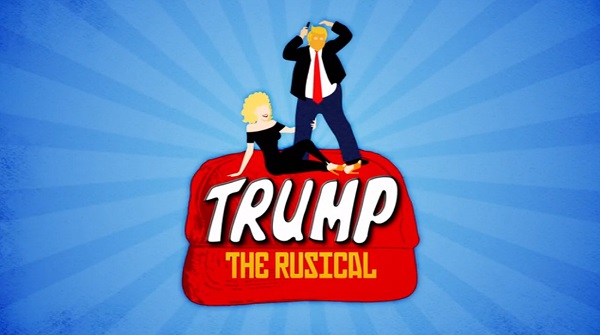 It’s the show that seemingly was never going to end, it honestly had more fade ins and outs than the last 20 minutes of Lord of the Rings. I still think it might be the funniest, or at least most coherent, Rusical since Shade in season 6? It’s probably mainly because it was at least parodying an actual show so had a baseline to go with, lord knows Kardashian The Rusical, Cher The Rusical and Pharmarusical could have used it. WHY DID SEASON 10 HAVE TWO? But I am still not excusing the rehashing of “Grease Lightning” to “Cheese Frightening”… What I found even weirder is that in the musical Stormy Daniels, Melania and Hillary Clinton should be the main roles and not the glorified chorus girls?

who as absolutely the best character and she was smart to snatch that role up in 3 seconds flat -not least because she doesn’t actually have to sing at any point and instead wanders around the stage with a cocktail in hand while playing the role of the narrator. Ariel, who was pushed into the role of Shandy

does a pretty stellar job, she has the most to learn and her lipsync and choreography weren’t bad – I think it says a lot about her runway that she wasn’t at least kept on stage for a critique. Lastly we have Silky as Oprah Winfrey

and good God was it not just majestic? And she was quite opposed to being Oprah, which makes me think that Oprah might be her Snatch Game choice? You knew she was going to win the challenge the mount she stepped out and Ru and Michelle LOST IT. And then when her tits started slapping around the cheque was as good as signed. 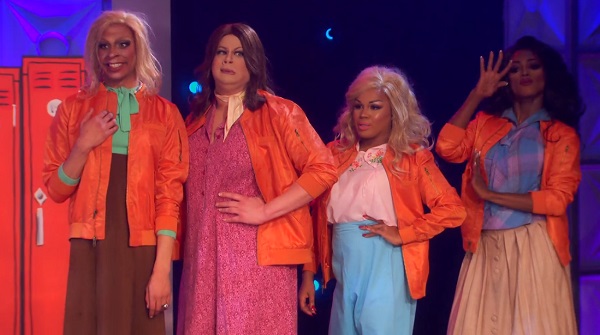 Which as we know is largely all it takes to amuse Ru and Michelle. Mercedes just sort of sauntered around in a pair of blue capri trousers – not that Ivanka Trump actually has much of a personality but the dialogue clearly called for a sort of vapid valleygirl affectation, not mid-West nail tech at the mall. I didn’t hate Ra’jah’s performance and in her defence the writing gave me zero Omarosa so I’m not surprised she played it as a fresh off the bus ingénue and looking more like Whoopie Goldberg in Ghost than Omarosa.

Given the characters involved in this particular scene it really has the potential to be the best scene but the song was just, well, Cheese Frightening is not exactly comedy gold. Shuga’s Hillary veered slightly closer to Jane Fonda than Hillary Clinton

But because you spent so much time trying to work out and remember who Vanjie was meant to be you didn’t end up really notice. And A’keria was fine as the bizarrely under written Stormy Daniels – it was such a weird choice, WHY WASN’T SHE SANDY? It’s the same amount of syllables and everything. 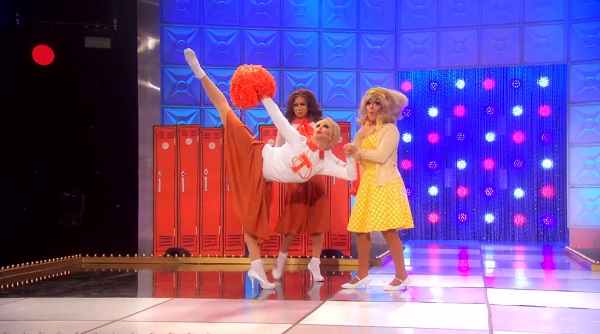 Ah, the Shit We Have Too Many Queens and Not Enough Parts portion of the show (which is weird given that these should be the main roles) – and the part everyone should really want given that they had the funniest lines and the least complicated choreography – netting Brooke a top placement and a near win. Plastique is also apparently The Woman With 1000 Faces as from last week’s pretty damn good Mariah Carey illusion she managed to pull off a very convincing Melania Trump, granted most of it is in the ability to squint and look confused but it still makes me fairly excited for her Snatch Game which prior to the season beginning I never thought I would say.

The revelation of the week is that Silky does her eyebrows with a Sharpie pen and nothing has ever felt so correct since finding out Yuhua Hamasaki shapes her cheek contour with a butcher’s knife.

The Tragedy Mirror is Back with a Vengeance

It isn’t quite at the relentless levels of Season 9 where every episode had a morbid tale of a queen’s tragic past with little to knw joyous bounce back but hearing Nina’s story of being targeted at college was harrowing. And then we had Mercedes open up about why she didn’t want to discuss her religion last week and they needed to resolve that issue because the storyline producers knew she was going home this week, SHE WAS WEARING CAPRI PANTS, and it was a really good and illuminating moment and I was impressed with Scarlet’s response of how the blame lay with the other queens as well for not making the space seem safe enough to discuss it. Then A’keria makes a yikes bomb joke.

Orange You Glad To See Me 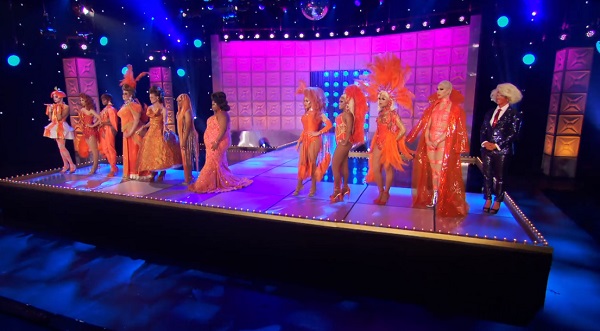 You can read the full recap of the runway here but the top look was definitely A’keria’s Sexy Lorax, with a shout out to Shuga Cain’s very ampt dragged up Donald Trump. At the bottom of the leaderboard was Scarlet’s janky tea dress that she was ill-advisedly proud of.

A Tale of Two Guest Judges

I’m still not sure where I stand with Joel McHale’s “YEEEEAH!”s – on one hand I am glad he was so excited, and it was clearly ~a bit~ with Michelle, but part of it also felt very straight girl bachelorette party at a drag show. But the true star of the judging panel was Tiffany “New York” Pollard who absolutely needs to be a permanent judge because I want to hear more about her Rosie O’Donnell fantasies and if she doesn’t start an A’keria Davenport Ass Padding Fan Club, then I will. Shout out to the uncredited third guest judge Michelle’s Side Eye